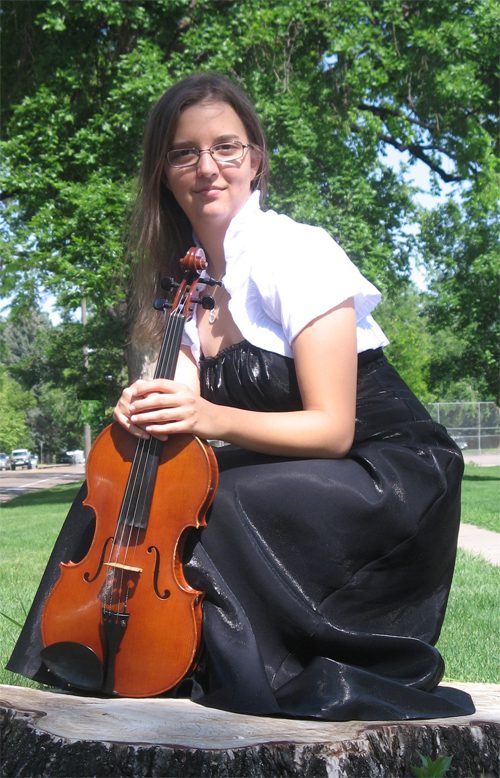 According to a letter in the Aspen Times, Sabrina Romney Lloyd has been known to lay down some “fiery licks that have no doubt been appropriated by the likes of Jimmy Page and other heavy metal rockers”. As a solo artist, she has performed as part of Utah State University’s Musica Viva concert series and toured the state of Colorado as a prizewinner of Colorado State University’s Concerto Competition; performing at such venues as the Breckenridge Riverwalk Center and Aspen’s Harris Hall.

Sabrina has enjoyed spending her summers participating in diverse music programs such as the Aspen Music Festival, Le Domaine Forget and the American Conservatory of Music in Fontainebleau, France. While in France, she performed in an independently sponsored new music concert and collaborated with architects in Fontainebleau’s Fine Arts program on their final project combining music and architecture.

A fan of orchestral music, Sabrina is a violist in the Fort Collins Symphony, Cheyenne Symphony, Greeley Philharmonic, and Wyoming Symphony orchestras. Her passion for performing music began when she and her sister, a violinist, created a string quartet with their friends and began performing in their home state of Utah. Sabrina chose to attend Utah State University for her undergraduate degree, where she studied with the Fry Street Quartet. Sabrina’s experience with this ensemble led to masterclasses with the Ying, Calder and Shanghai quartets along with the Kalichstein-Laredo-Robinson Trio.

After acquiring her Bachelor’s Degree in Viola Performance and a French minor, Sabrina moved to Colorado to take part in Colorado State University’s Graduate String Quartet Program, performing frequently at the university and participating in outreach events in public schools along the Front Range. While in graduate school, Sabrina was a prizewinner of T. Gordon Parks Collegiate Concerto Competition.

A versatile musician, Sabrina also sings, plays the violin and the piano. On the rare occasions when she is not musically inclined, Sabrina loves to read novels, spend time in the great outdoors, or pursue her interests in French language and culture.