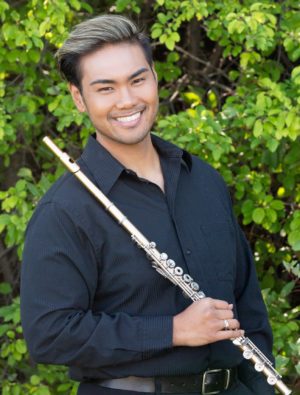 Filipino-American flutist Norman Menzales joined the Great Falls Symphony of Montana as Principal Flutist in 2012 and appointed the same position with Colorado’s Fort Collins Symphony in 2013. Praised for his “…warm, attractive sound” by the Winston-Salem Journal, Menzales has performed with the Buffalo Philharmonic in New York, the Erie Chamber Orchestra in Pennsylvania, the American Academy of Conducting Orchestra at the Aspen Music Festival, and the Western Piedmont Symphony in North Carolina, among others. He has appeared at the Aspen, Bowdoin, Colorado College, Eastern and Sarasota Music Festivals and has shared the stage with notable conductors and performers including Marin Alsop, Joshua Bell, Renee Fleming, Alan Gilbert, Dame Evelyn Glennie, Gil Shaham, Leonard Slatkin, and David Zinman.

As a soloist, Menzales was awarded top prizes in Young Artist Competitions sponsored by the Atlanta, Central Ohio, Pittsburgh and Rochester Flute Associations. He has performed concerti with the Fort Collins Symphony, North Carolina School of the Arts Solisti Symphony, the Eastman Chamber Orchestra, and Ars Nova Musicians of New York.

An artist dedicated to sharing and spreading his passion for chamber music, Menzales performs as solo flutist of Montana’s premier woodwind quintet, the Chinook Winds. The group strives to bring live, classical music to rural communities throughout the United States and stresses the importance of music education in schools. The Chinook Winds have toured and performed throughout the Northwest and was invited to perform at the 2015 International Horn Symposium in Los Angeles and the 2015 International Double Reed Society’s Conference in Tokyo, Japan.

As an enthusiastic educator, Menzales recently joined the music faculty at the Festival Internacional de Loja in Ecuador and the Western Nebraska Community College. He also maintains a private studio in Montana and has given masterclasses at the University of Montana, Montana State University, University of North Carolina School of the Arts, University of North Carolina Greensboro, Auburn University and the University of Wyoming. Menzales is a founding member and first president of the Montana Flute Association, a non-profit organization whose goal is to cultivate, promote, sponsor, and develop the appreciation of the flute and flute music among its members and the general public.

Born in Macon, Georgia, Menzales began studying the flute at the age of twelve and played in a variety of community ensembles. After graduating with a Bachelor of Music with Dr. Tadeu Coelho at the University of North Carolina School of the Arts, he continued his graduate studies at the Eastman School of Music where he served as a teaching assistant for world renowned flutist and pedagogue, Bonita Boyd. While at Eastman, he taught as a flute instructor at the Eastman Community Music School and served as a mentor for the New Horizons Band Programs in Rochester, New York. He graduated with a Master of Music, a Performer’s Certificate, and completed two years of doctoral coursework before leaving and assuming his position in Montana.

When not playing the flute, Norman enjoys cooking, binge-watching tv shows, reading and spending as much time as he can with his husband and their Cocker-Spaniel, Daphne.