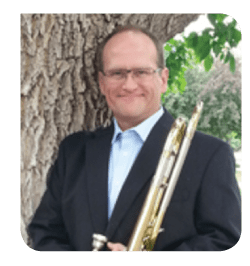 Jeff is a Colorado native. He earned his Bachelor’s degree in Trombone Performance from Colorado State University and his Master’s in Performance from the University of Denver. He has played with The Denver Brass since 1994 and the Central City Opera Orchestra since 2001. Jeff has performed with a variety of groups up and down the Front Range, including the Colorado Symphony Orchestra, Colorado Springs Philharmonic, Boulder Philharmonic, Longmont Symphony, Apollo Chamber Brass, Denver Municipal Band, Opera Colorado, and the Colorado Ballet, among others. In addition, Jeff was Principal Trombonist with the Cheyenne Symphony and Boulder’s Dinner Theatre in the 1990s.

In high school, Jeff was still undecided about which direction music might take him. He sang in choirs, played in band, and acted in plays. It wasn’t until he was a student at CSU in 1983 that he played with his first orchestra. Coincidentally, Jeff’s first meaningful orchestral experience was with the Fort Collins Symphony Orchestra while studying at CSU. He remembers the FCSO performed Brahms’ Symphony No. 1, and in fact, that notable experience was instrumental in his decision to become a classical trombonist.

Aside from music, Jeff enjoys woodworking, throwing Frisbees for his dog Tango, the occasional game of disc golf, and going on vacations with his wife, Heidi. They, along with Tango and Diva the cat, live in Centennial.