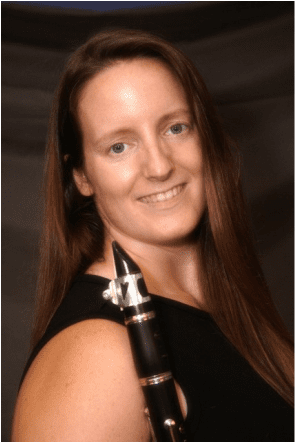 An active doubler, April is a member of the BDT Stage Orchestra, playing clarinets, flutes, saxophones and double reeds. She is the Bass Clarinetist of Wil Swindler’s Elevenet, a premiere jazz band in Denver, Colorado. April is also a member of the Jesse Manley Band where she plays bass clarinet and clarinet. She can be heard on the commercially available recording, Universe B with Wil Swindler’s Elevenet on the Origin Records label and A Gothic Folktale with the Jesse Manley Band. In 2008, she performed on the main stage at the International Association of Jazz Education Convention.

April resides in Longmont, Colorado with her husband, composer Wil Swindler, their daughter, Annika Johannesen, her beloved dog, Grub, and her kitties, Oscar, Ella and Rosie. Together they enjoy weightlifting, hiking, traveling, golfing, racquetball and gardening. Her passion for gorillas and her love of the bass clarinet inspired April to commission composer Wil Swindler to write a concerto for her depicting the life and struggles of wild gorillas.