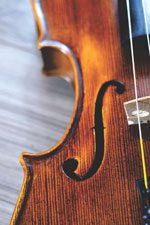 To commemorate the 50th Anniversary (1949-1999) of the Fort Collins Symphony under the direction of Maestro Will Schwartz, the Guild established an endowment to sustain salaries for the orchestra in perpetuity. After a donation from the Riedman Foundation and various fundraising activities by the Guild, the first chair was named and the Endowment was established at $50,000.

RETURN TO ENDOWED CHAIRS
JOIN FRIENDS OF THE SYMPHONY