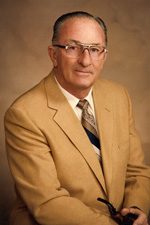 Tom and Marie Livingston endowed this chair to honor Tom’s father who served in the infantry and played trumpet in the World War II Military Band. At Colmar, France, the band played for dignitaries after the Normandy invasion. After earning his PhD, Clark became a Colorado A and M professor in the Department of Botany and Plant Pathology and served as director of the Aggie Stage Band.

RETURN TO ENDOWED CHAIRS
JOIN FRIENDS OF THE SYMPHONY