Another morning rehearsal this time back on the Copland which was a bit rusty from the weekend’s activities. The music came back soon enough allowing us to go through the entire piece and then the concerto. The Dvorak was more challenging and during the break the personnel manager came to me and told be that because of exams at the Academy of Music, two oboes and the pianist could not make tomorrow AM’s rehearsal. Thus he asked me if starting at 1:30 would be adequate. Then the Assistant Concertmaster asked if we could get more string section rehearsal on the last movement. So within the span of ten minutes, we went from a scheduled AM rehearsal for the next day to a 1 PM string sectional and a 1:30 full rehearsal in concert order. It was amazing that the orchestra was able make this change the day before, but they did, and without apparent complaint. Flexibility is a required trait for the musicians and even with other jobs, they make their complicated lives work. What was NOT communicated to me was that in the wheeling dealing of scheduling, I had lost 30 minutes of rehearsal from 3.5 hours in the morning to only 3 hours in the afternoon. Something that would cause consternation the next day.

When rehearsal was over we headed to a traditional Vietnamese restaurant where the dishes came from several regions in the country. This included noodle dishes, dishes wrapped in rice paper (Lan again did the assembly), a type of fried dish that resembled a quesadilla, but done with rice paper, and then finally a fruit concoction that you mixed in a glass then added ice. All wonderful taste treats and all very filling.

We returned to our hotel for some rest before being picked up to go to one of the most successful restaurants in Vietnam, a Japanese pizza house called For P’s and Pizza. The monogram “P’s” being short for peace. Lan had managed to get the last table available that night, but in fact should have made a reservation a month ago. The first of these was in Japan, but now there are a several throughout Vietnam and they are never without business. This is for good reason, the pizza is some of the best we’ve ever tasted. Semi-chewy crust, they make their own cheese, and the presentations are extremely intriguing. Lan ordered several pies. One had a soft camembert cheese that was then spread over the rest of the pizza slices. My favorite was duck, pear, and blue cheese. Thang pointed out that the pizza is always cut for the number at the table. We had six which is not unusual for pizza slices, but they can artfully do 5 and 7 as well. Even after several slices we ended with a crab pasta with a creamy peanut type of sauce and then Tiramisu (a very popular dessert in the area) for final treat.

The restaurant was located in the downtown area near the opera house. There are stores lining the streets, some being the upscale names you see in Beverly Hills, Prada, Louis Vuitton, Chanel, Dior. It is clear that someone is spending money in this country. There are also many modern and gleaming hotels sprinkled throughout city. Pan Pacific, Intercontinental, boutique hotels, and of course a Hilton right next to the opera house . . . think about that one.

In walking back to the car, we passed one of the oldest ice cream stores in the city dating back to 1958. It looked tempting, but our stomaches said no. Tomorrow would be the final rehearsal in the music building before the orchestra moved to the opera house. 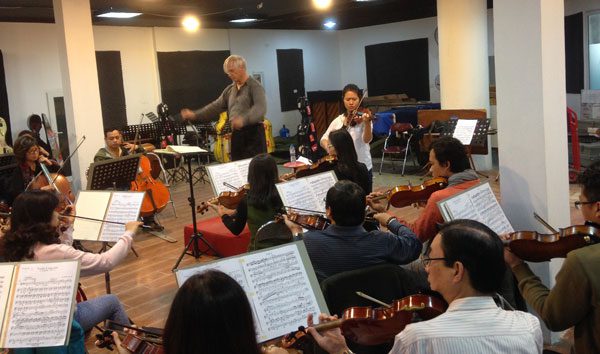 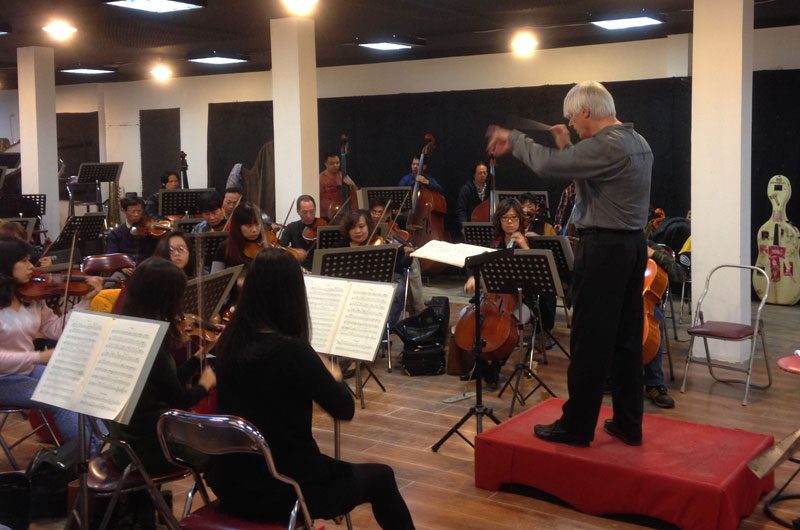